I had reviewed a book by Khaled Hosseini called ‘And The Mountains Echoed’. You can read that book review here. That was breathtaking. I absolutely loved it. So I decided to check out another one of his books. So I bought ‘The Kite Runner, which my friends told was great. ‘The Kite Runner’ was the first book Khaled Hosseini released, succeeded by ‘A Thousand Splendid Suns’ and ‘And The Mountains Echoed’. 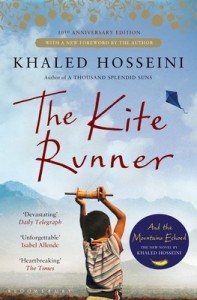 This riveting story involves guilt, betrayal and redemption. It is very emotional and heart-touching and I cried a few times while reading it.

The book is narrated by Amir, the main character of the story.

The story is mostly set in Afghanistan and the rest of the story is set in the USA.

The story takes of in relatively liberal monarchy of Afghanistan in 1970s, before the invasion of a military takeover and the Russian invasion would change the beautiful landscape of Kabul forever.

The story revolves around two friends, almost as close as brothers, Amir and Hassan, who also were experts at kite-flying. Amir is the son of a rich Sunni Pashtun businessman and Hassan is the son of their servant, who belonged to the inferior class of the Shia Hazaras. Their fathers live together in a flourishing neighbourhood of Kabul. The Hazaras act as servants to their Pashtun superiors, but are also part of the family, clashing with the social standard.

Amir’s father, whom he calls ‘Baba’, treats Hassan as a second son and is torn between feelings of wonder and dislike for his magnanimous father. In similar fashion, his colliding jealousy and appreciation of Hassan is putting their ‘friendship on the edge, as Hassan’s rectitude is the single factor holding the relationship together. The author recounts the household’s complex family progress evocatively.

Amir, who is continually fighting for his father’s love, finally succeeds by winning a kite-flying competition. But that day he witnesses a dreadful action and does nothing to stop it. This perturbs him for the rest of this life. His friendship with Hassan is affected and Amir deviously gets rid of Hassan.

In the middle of all this, Afghanistan is conquered by Russia, dividing Amir and Hassan entirely. Amir and Baba flee to America. Amir starts over in America, his past still haunting him. A phone call from America takes him back to his home country where he learns a shocking secret about his past and tries to make things right, or as Rahim Khan, a character in the book, says, “A way to be good again”.

Hosseini masterly portrays Afghanistan and its opulent lifestyle, a magnificent nation torn apart by war, with scenes of a man selling his leg to feed his family, a couple being stoned to death and a boy being forced to dance like a monkey for the entertainment of others.

This novel doesn’t concentrate on politics and war as much as it does on the lives affected. This tale is about friendship, loyalty and salvation, even amid the terrors of war. The characters are so realistic that long after you have finished reading the book, you will be thinking about Amir, Baba, Hassan and their actions.

This book is a must read, regardless of gender, nationality or race. I would recommend this book for readers over 12 years and above, as it has some complicated words and scenes. It conveys a global message that can move even the coldest heart.

There is a film adaptation of this book, also called ‘The Kite Runner’, which is as good as the book. Majority of the movie is spoken in Dari, the remainder spoken in English.

An awesome and fascinating book. I absolutely love it. It has a big twist in it, and those are the types of books I like to read. This book made me cry a couple of times, sometimes out of sadness and other times out of happiness.

My favourite character is definitely Hassan. He sacrificed a lot for Amir, even though Amir couldn’t do the same for him.

An awesome book to read.