Most budding writers might envy Christopher Paolini. He was only fifteen when he started writing his first book and finished it in four years. Eragon outsold J.K Rowling’s Order of the Phoenix and simultaneously spawned an army of Dragon Rider fans. And all this happened before his twentieth birthday.

Eragon is the first novel in the Inheritance Cycle series. 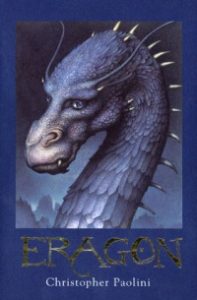 The story takes the reader to a long, long time ago which was forgotten, filled with warriors and elves, mystery and magic, shades and dragons. Eragon is an orphan teenage farm boy who lives a relatively normal life with his uncle and cousin in the small village of Carvahall in Alagaesia. He loves hunting and he often ventures deep into a mountain valley that very few dare to enter. It’s on one of these expeditions that he finds a small and unidentifiable stone that will make his future something of legends.

One can’t help but notice the cliches in place. Eragon has never met his parents and never knew who his father was. His mother abandoned him as an infant and he has been helping his uncle in the farm and hunting ever since. It isn’t long before the author reveals that the stone that Eragon found was in fact an egg. A powerful dragon hatches from it. When he touches the dragon, there is a bond formed between the two of them. After some weeks, the dragon grows and it is more powerful and intelligent. Just when the reader wonders what the point of all this is, a tragedy unfolds. Simultaneously, a new character is introduced who knows ancient legends and magic, and speaks about the Riders who once kept peace and prosperity.

Is Eragon destined to be one of these powerful people? Will he overthrow the king who dilapidated Alagaesia with his evil rule? Unfortunately we can’t find out in this instalment of the series. Eragon is just the beginning of a wonderful adventure. There are many unanswered questions and many tasks left undone. Thus, I’m very excited to read the next book in the Inheritance Cycle series.

There is a movie based on this book. It is also called Eragon.

I’ve read many action book series so far such as the bestselling Percy Jackson and Harry Potter series and this book was an amazing, amazing book. I also shed a few tears at some points in this book.

I don’t have one favourite character, but two. I just adore the duo of Eragon and his dragon. They are so caring about each other and love each other unconditionally.

A good book to read.