A super hero vs super hero extravaganza i.e. Captain America vs Iron Man. Its supposed to be the most mature and substantive picture to have yet emerged from the Marvel Cinematic Universe. 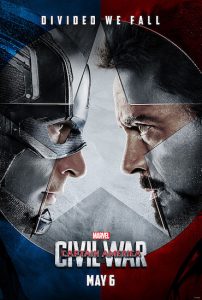 It’s very much an “Avengers” movie with some additions & subtractions though of the super heroes. An epic clash between the two equally noble super heroes who realise they are causing almost as much death and destruction as they’re trying to prevent which requires them to surrender. Question is ‘Are all the Avengers in for surrender’ ?

The Avengers are out to kill each other! There is a lot of anguish as old friends stand opposite each other. 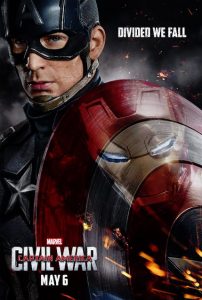 As clearly mentioned in the title Captain America: Civil War. Steve Rogers, a.k.a. Captain America, again played by the most excellent Chris Evans is a strong character of its own while Tony Stark aka Iron Man the estimable Robert Downey, Jr, is an even more stronger character with his punchlines. As a viewer, you keep empathising and switching sides here.

With its death-defying action sequences, charismatic additional superheroes, and emotional character development, this Captain America is both intense and entertaining. It’s an excellent movie to watch though my  expectations, hope on the movie was flaring elsewhere.

Anyways as I don’t have any hand in the making, can’t crib on that.

“I’d like to punch you in those perfect teeth.”

Iron Man to the Captain