Coming to the Story, Amitabh Bachchan, an old aged man, is in search of his granddaughter who was kidnapped & murdered. His years of grief takes a new turn after eight years of her death when he manages to get his 1st clue and that’s it – it’s no stopping for him. 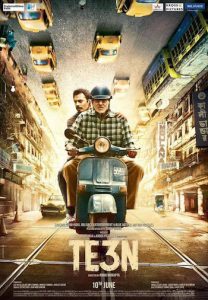 His only hope is Nawaz, then cop & now a priest. Will he manage to find the kidnapper with the help of the police or he’s on this journey on his own?

Performances –  As far as the performances are concerned the exceptional ‘trio’ has done a superb job. In a yet another moving performance Amitabh Bachchan shows why he is the ‘Muqaddir Ka Sikander’ with every role he takes up. He encapsulates the helplessness and hopelessness of a grandfather who has suffered a personal tragedy and trauma like no other. Vidya Balan as a stoic police officer is average, not over the top or melodramatic. Nawaz too brings to the table a fine mix of intensity and subtlety. However there is a story between Vidya & Nawaz that seems unfolded…Untold (gap in the story line here)

The story begins well, but soon you lose track of what is happening because there’s nothing much happening.The story looses its focal point. After watching so many movies, I generally get the climax but this movie was so misleading that you just give up. It is disappointing considering what the film could have been, had the major issues been paid a bit more attention to.

At 2 hours 16 minutes, the film seems to stretch on till eternity where you just feel like leaving the theatre. TE3N suffers from sloppy editing.
It makes no impact on the mind. No particular song stays on in the mind once you’re done with TE3N.
I was assuming this movie would be like ‘Kahaani’ but NO – it’s no way close.

The only strength of TE3N lies in its performances and not in the storyline.