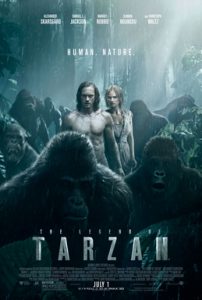 a decade of living in society with his beautiful yet simple innocent wife, Jane (Margot Robbie). The reluctant hero isn’t in consent of taking his wife with him but then gives in. George Washington Williams (Samuel L. Jackson) wishes to expose the mistreatment of the Congolese people for which he wants Tarzan to help him with.

The movie starts out with an intense battle that leaves many dead, and there are scenes of shooting, people being slaughtered & very loud gorillas attacking people.

Tarzan loses his parents when he’s a young boy (which could bother kids); he later fights both people and gorillas, and characters die.

Watch the ‘The Legends of Tarzan’ movie trailer here:

Older teens may appreciate this but younger kids, in their innocence may not relate to this. There’s also some drinking, passionate kissing which parents discretion is required.

Parents – Expect plenty of brutal action violence: I took my kids but may not have been a good idea (undoubtedly they enjoyed it).